The New York Times – “Hatred, jealousy and despair come to life, almost as characters in their own right, in the Repertorio Español’s Spanish-language production of ‘La casa de Bernarda Alba’. García Lorca’s grim satisfaction in exposing the pretensions, self-deceits, and destructive willfulness of Bernarda Alba and her five daughters in a world of women who are all victims is almost palpable.”

The play is currently showing on streaming at Repertorio Espanol. Play performed in Spanish with English supertitles. Get access here for streamed performance. 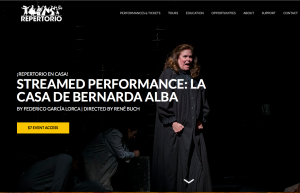