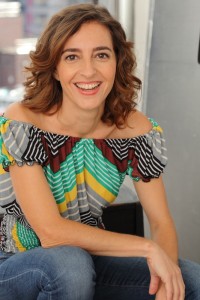 Spanish actress and faculty member at HB Studio where she teaches Uta Hagen’s technique. She is also the cofounder of Corezon, a successful and independent theatre and audiovisual company based in NYC.

Maria was born and grew up in the beautiful city of Barcelona. Theater has been in her blood since early childhood. Her earliest memories began as a child doing in-home dramatic presentations with her three brothers for their parents. Maria understood instinctively what Oscar Wilde said best, “I regard the theatre as the greatest of all art forms, the most immediate way in which a human being can share with another the sense of what it is to be a human being”.

Maria began her career working in corporate finance following her graduation with a Bachelors in Science in Economics from the world renowned Pompeu Fabra University in Barcelona. However, her interest in theater never wained. While working, she nurtured her acting avocation by earning a Bachelors in Fine Arts from Barcelona’s Eòlia Conservatory of Dramatic Arts and performing in several theater productions in Barcelona.  Ultimately, her inner voice nagged relentlessly prodding her to leave the security of her corporate post and pursue her passion for acting in earnest. She set out for New York’s prestigious HB Studio, to pursue the Core Training program in acting (awarded for a scholarship). Once immersed in the HB Studio’s intensive study of acting, and exhilarated by the inspirational professionals teaching the experiential curriculum, she finally found her groove! She was part of the HB Ensemble and is actually part of the Artistic Council. Proudly part of the Hagen Institute alumni.

As a staged actress, Maria has an extensive experience on stage in the United States and Europe. She has performed leading roles with renowned theaters such as Repertorio Español (La casa de Bernarda Alba de Federico Garcia Lorca), Julia de Burgos Performance Art Center (Tierra del Fuego de Mario Diament), Dixon Place (Casablanca on the Hudson by Pamela Enz), Theater for the New City (City Girls of Desperadoes by Pamela Enz co-starring with Austin Pendelton and Julie Atlas Muz), Teatro Círculo (Seis by Federico Roca winner of five FuerzaFest Awards, including Best Play and Best Actress and three HOLA Awards 2017, including Oustanding Performance by a Female Actor), Russian Arts Theater, IATI, HB Playwrights Foundation, Teatro SEA, to name a few. In Film and TV, Maria played the lead role for the criminal series Six Degrees of Murder (ID Discovery Channel) and has recently shoot the film The Middle of Somewhere, winner of the Royal Film Award 2018 and the short film Latiner, Selected Official for the Latino Short Film Festival. In voice over Maria has been the voice for the Super Wings: Barcelona Birdhouse.

“She has a full emotional instrument, ample courage, and a rare ability to empathize and embody a range of characters. She is an actress, without doubt.” Mark Blum